Now, I never knew how much I liked caves. I mean, I’ve been to Wookey Hole and Cheddar Caves, and they are great, but Phong Nha caves, wow, simply wow! I never thought I could be blown away by a cave but these were something else. Phong Nha cave was an experience itself.  You take a boat which chugs along the river to the large entrance of the cave, and then once inside the gaping entrance,  the engines are switched off, and the boat drivers get out their paddles. 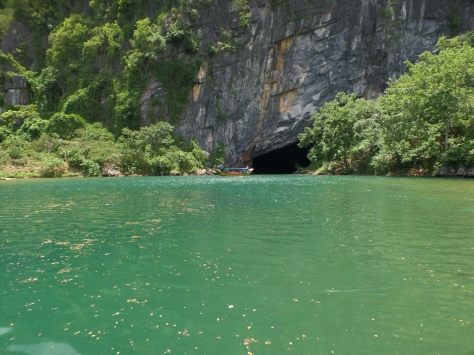 Drifting slowly through the dark cave in silence, save for the sound of the odd huge drip into the water from the cave roof, the sound intensified by our and the boat’s silence, was an experience itself.  As I looked above me the natural formations of stalactites and the bubbly erosion of the cave surfaces were beautiful. 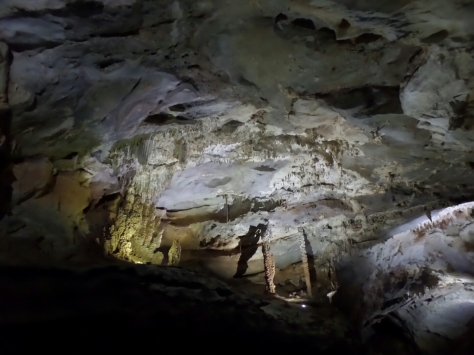 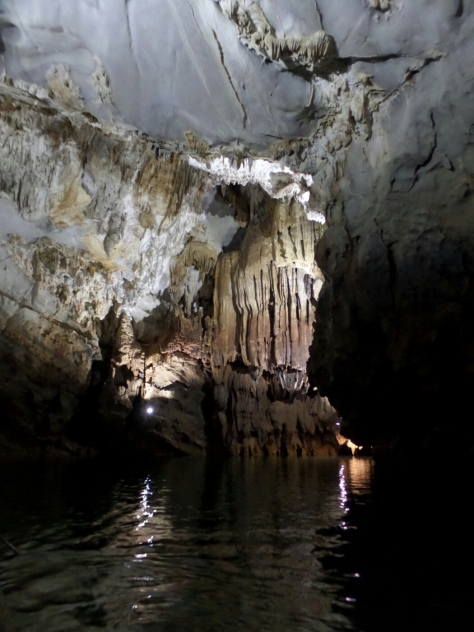 Some way into the cave we moored up on a bank, and the rest of it you walk around on the sandy bottom of the cave.
I was absolutely blown away by this cave. There were huge pods and formations on the ceiling, and I felt like I was in a film, and any minute now aliens would start popping out of the cocoons,  dropping down onto their unsuspecting prey in the cave below!

A couple of panoramic shots from inside the cave 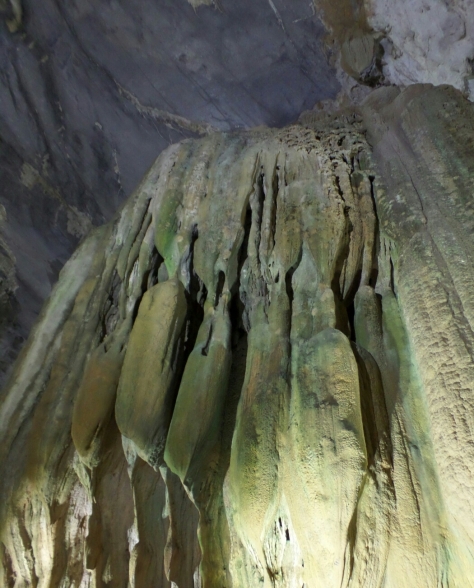 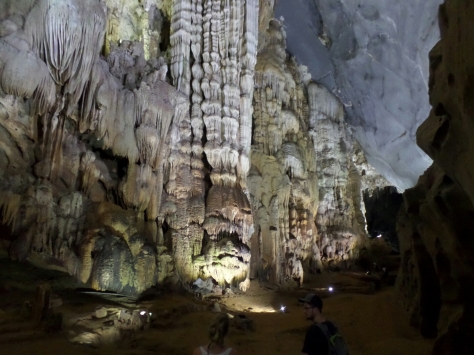 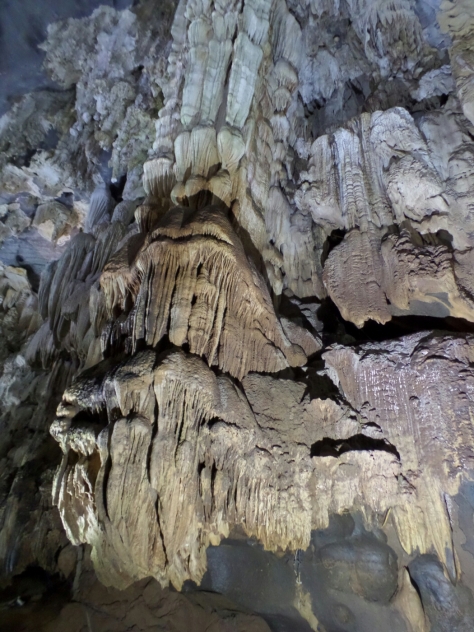 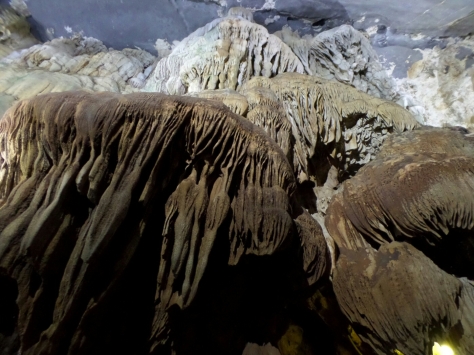 I hope some of my photos have done the cave justice,  as you never can quite capture the full picture along with the full amazement of a place.

I met a great couple from Germany, Judith and Thomas, and on the Saturday we decided to rent motorbikes and ride around the national park, exploring a couple of the other caves, Paradise Cave and Dark Cave.  Paradise Cave was magnificent, similar inside to Phong Nha,  but on a much grander scale.  This was the stadium to the arena we’d seen the previous day.

That being said, I did prefer the smaller cave the day before, purely because the experience was that much more, going in on the  boat and walking around the bottom of the cave, rather than the Paradise Cave purpose built wooden walkway system.  The walkway is 1km long, the actual cave goes on for 7km but you had to book a special tour (highly expensive) to go any further. 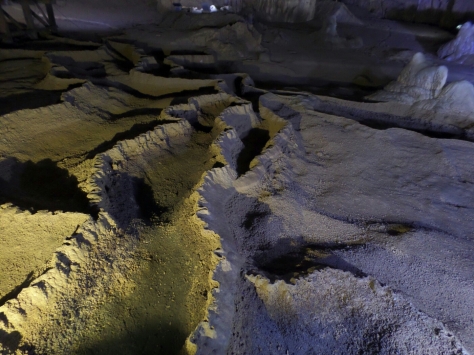 Formations just like a row of statues at the entrance to a grand house! 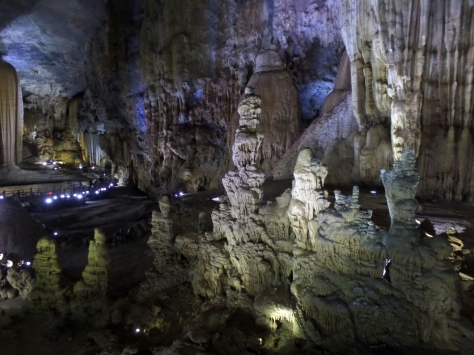 Phong Nha is also home to the world’s largest cave, however there are only 250 permits issued a year, to the tune of $3,000!  The waiting list is also a year long!

We also went to the Eco Trail, which was a wooden walkway built through the forest and over the river, and when you get to the fast flowing river you could go in for a swim, but only with life jackets on. This was great fun, sliding off the rocks into the river, and also trying the river ‘swimming machine’, (swimming against the current,  so never actually getting anywhere!) Nature’s running machine! 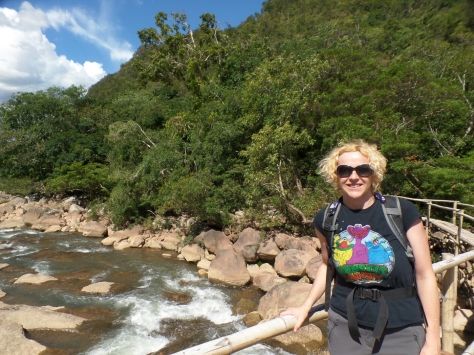 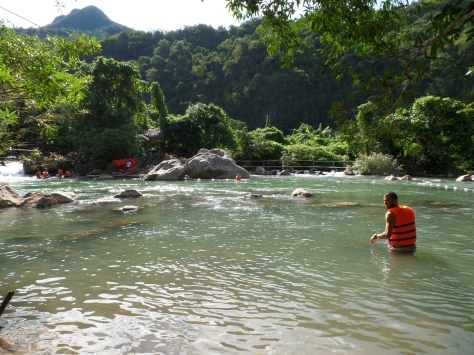 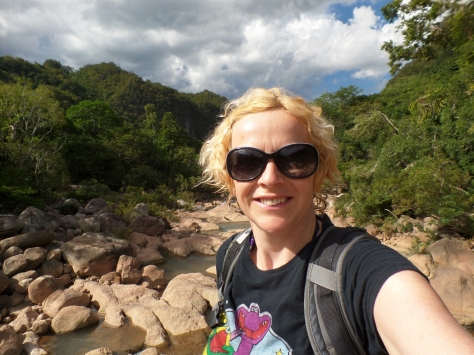 Thomas on the bike

Now the most fun bit of the day, was the Dark Cave.  Unfortunately there are no pics of this, as when I asked if I could take my camera in, the ticket seller asked ‘is it waterproof?’, hence why I left it in the locker.

In this cave you had to go with a guide, and there was one guide to us three.  Wearing nothing but our swimming gear, a lifejacket and a hardhat with a headlight on, we hopped into kayaks and made our way up the river towards, you guessed it…..the Dark Cave!

I was slightly apprehensive about this one, because I didnt know what to expect, I certainly didn’t want to be wriggling through very tight spaces as I would get claustrophobic!  I had asked a couple of people on their way out if it was scary and they assured me it was just great fun!  So, in I went.

As the light started to fade and we headed deeper into the cave, we turned the head lamps on and walked along a sandy bottomed cave, which soon turned into sharp stones, ouch!  This was soon relieved as we got into a kayak and went a little way into the cave in this.  Now we had turned a corner into the cave, there was no natural light in the cave, and we literally just followed the light from our hats.  We were walking through water in the cave, which started to get deeper, until it was up to our thighs, and then under our feet the water started to turn into mud, getting gloopier and thicker until the water alone had disappeared and we were wading through thick, heavy chocolate-like mud!

The cave started to narrow, until it was only a foot’s width at the bottom (ie. The width of my foot,  not a foot wide……if that makes sense?!)  The walls went out in the shape of a v, and were a slippery muddy edge to steady our hands on whilst sliding and slipping through the gloop with our feet!  Sometimes the gloop would suddenly go deeper so we plunged into the mud further than expected!  Then we had to try and haul the lost foot out of the gloopy mud, which had created a suction like attachment to the foot!  This made for lots of squelching noises and we were laughing like kids,  along with struggling to move on in the cave.

We then got to a bit where you had to climb up the gloopy mud.  Above the surface the mud was more like a soft clay, so climbing up was just as hard,  sinking into the mud with every step we took!  Then at the top, a slide down the other side! Weeeeeee, yes we were just like kids, plunging into the wet gloopy mud at the bottom.  (Covered almost head to foot in mud, I think any camera would need to be more than waterproof to take it in the cave! It would need to be able to see through mud for a start!)

We reached the end, which was only what I can describe as a massive mud bath!  We walked into it, and our guide said to lay down in it, and then turn our headlights off….. wow.  This is what total pitch black looks like. (Well, it looks like nothing, but black, obviously!)  With no ambient light there was no adjusting of the eyes, you would never be able to see a thing in here, ever!  Laying in the pitch black, suspended in the thick mud, in the silence of the cave, was an experience.  The guide started messing around making scary noises, and throwing bits of mud to make sounds through the cave.  Of course we weren’t falling for it, but I did half expect him to creep up on us to try and scare the hell out of us.  Luckily he didn’t,  and after ten minutes or so laying there,  experiencing being suspended in the heavy mud with absolutely zero light, we switched the lights back on and headed back out to the next bit!

This time we headed into deep water to wash all the mud off which was now all in our hair, and over our entire bodies.  My bikini bottoms were full of mud!  Very attractive!

As we swam and washed it all off, the guide pointed out to the other end of the cave with his torch, and said to swim there alongside his kayak.  We did this, which proved a little difficult with a life jacket on which was pushing my hard hat over the front of my face, which I was obviously trying to keep above the water – annoying!  Once at the other side, he then told us to turn our head lamps off and swim back.  Here you could just see a tiny bit of light coming through from outside to head for, but having the lights off and swimming through the dark cave was very eerie indeed.

We made it though, and back out of the cave into the kayaks again, back up the river to where we started.  That wasn’t the end though, we then had to zip wire across the river,  dropping into it from a height!  I was a little, ok very, apprehensive about this, and almost didn’t do it, because I thought I would slip off the handle and let go as soon as I jumped off (and at the start the zipwire was very high above the water!)  I had also seen Thomas do it and because he hadn’t let go of the handle before the buffer, it span him round upside down into the water head first, I didn’t fancy that!  Anyway, the guide said he’d do it with me on the one next to me.  I’m glad he persuaded me as it was great fun, and I managed to let go so I didn’t go head first into the water!

This was absolutely awesome fun and might have even pipped the other caves to the post for the number one spot.  If you ever get the chance to go to Phong Nha, don’t miss The Dark Cave!

A bike ride around the local area 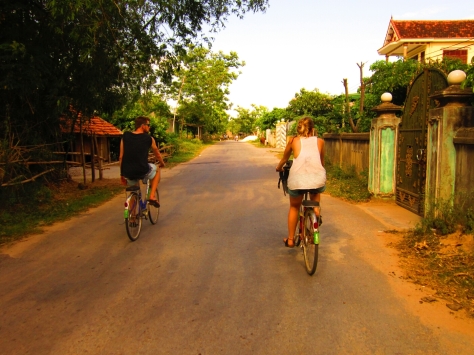 The scaffolding never ceases to amaze me!

The market in Phong Nha 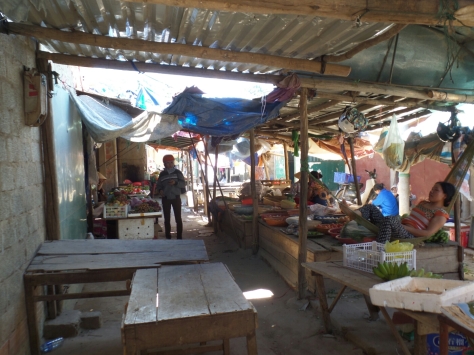 These ladies squealed when they saw me, and tried taking a secret photo, and when I smiled at them they asked if they could have a pic with me, they were so excited it was hilarious, after several photos with different members of the family, I felt like a celebrity!