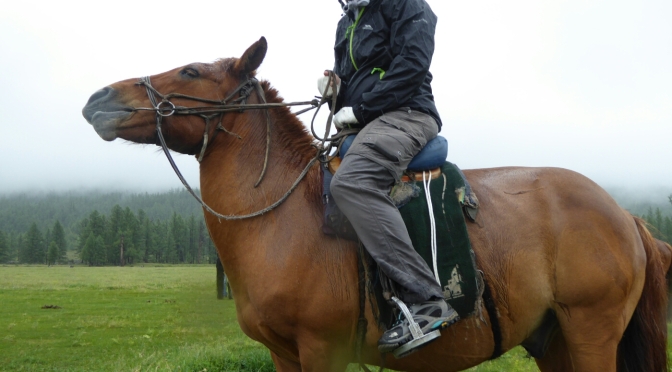 A walk up the hill at our ger camp 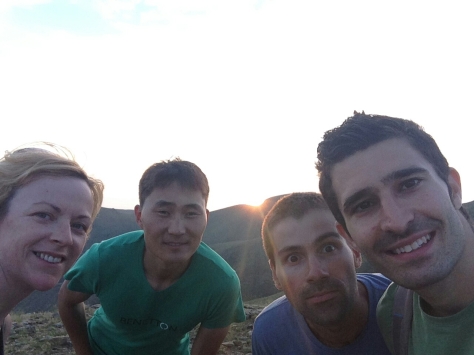 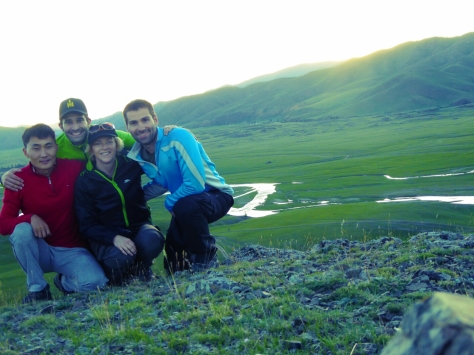 When we set off on our horse trek, it was spitting with rain.  We headed off into the beautiful valley, where there were trees, rivers, and hundreds of black volcanic rocks strewn at the edges.  We stopped off at a ger for our picnic lunch as it was raining,  and getting heavier.  By the time it came to get back on our horses, the huge cushion saddles, which were actually very comfy, were now absolutley soaking wet with the very cold rain.  This was a shock to the backside climbing onto these!  Cold, wet, and now completely soaked through, the rest of the afternoon continued the same with a relentless helping of heavy rain. 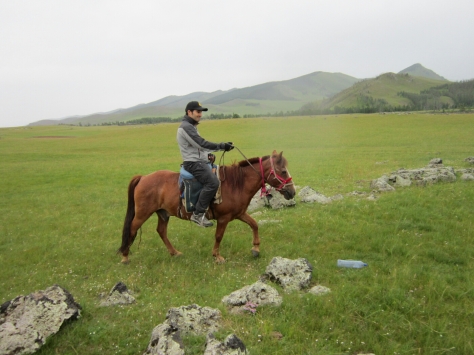 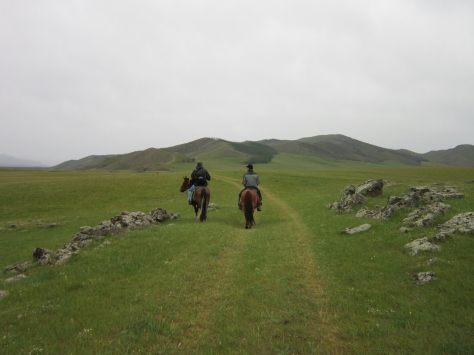 Our lunch stop off, with the cutest baby goats 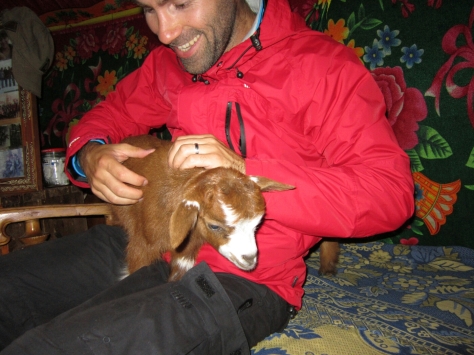 Our horses were excellent though, and very responsive, although that makes them sound like a car!  We were trotting and cantering through the lush green countryside,  and despite the awful weather, it was still very beautiful.

We arrived at a family ger who were unaware that we were coming, so they had to move out of their ger into their other two smaller ones, so that we could stay in theirs!  This felt odd to us, but this is how it works apparently.  They had an adorable baby girl and a very cute little boy who was around three years old.

On arrival to the ger we couldn’t wait to get out of our disgusting, soaking wet, sopping, freezing cold clothes (have I emphasised how horrible it was?!) so I got into my shorts that are my pj’s, and used my towel as a long skirt!  We didn’t take everything with us obviously as we were on the horses.  We turned their neighbouring ger into a laundry room, hanging our stuff from every beam.  Everything was soaked, except the sleeping bags luckily which had managed to keep dry on the pack horse. 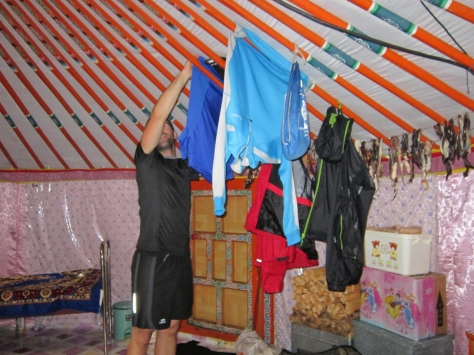 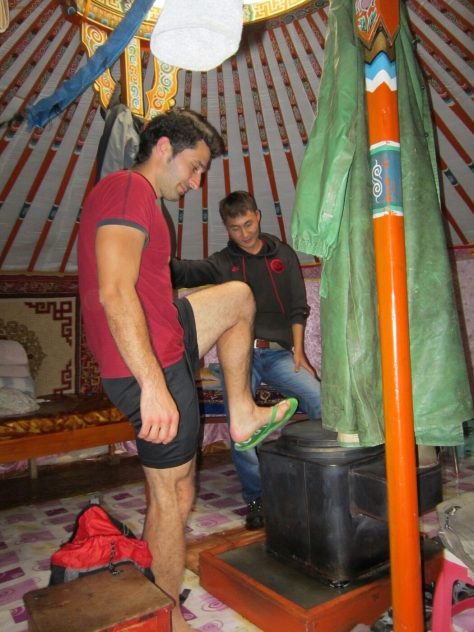 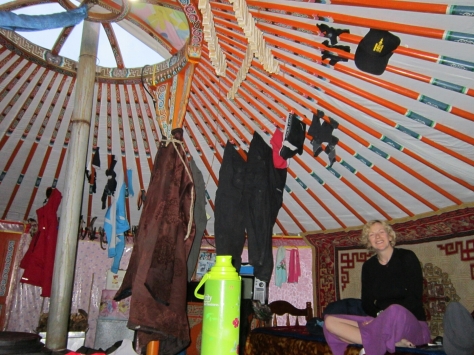 I wasn’t so keen on the very long trek to the toilet, through freezing cold long wet grass, and I mean really really cold!

There was however a really hot and cosy stove in the ger, perfect for warming our cold and weary selves.  We were holed up in the ger, and played the usual games of I Spy and the Name Game to while away the time, this meant that instead of 8pm which it very nearly was, lights out was at 10pm.  Oh yes it’s only rock and roll with us lot!

This really was a very pretty ger 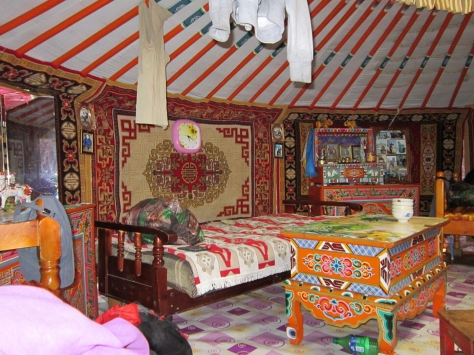 We really didn’t want to get out of bed the next day, because we knew what lied ahead of us.  The rain really had not stopped all night, and we weren’t looking forward to the day’s ride in the relentless rain.

My make shift gloves as the rain was SO SO COLD

Mucking around before our trek

As it turned out, the rain was lighter.  Although we were still soaked through, it was a little more bearable, and also we had gotten a lot more confident on the horses, so were going at some pace.  The scenery back was also just as amazing.  At one point we were heading pretty fast along the open grassland when my horse (following our guide Gala’s horse),  started to gallop!  I absolutely cacked myself and after a short while got it to slow down.  I have had one horse riding lesson in my life and I managed to fall off in that, so I am certainly no pro!  Afterwards I asked Gala what you are supposed to do when a horse starts galloping, ie. Do you need to lean forward/back, anything specific?  To which he replied “just keep your balance!”  Good advice I guess!  I think the Mongolians grow up on horses, so it’s second nature to them, and a lot of the time no saddles or stirrups! 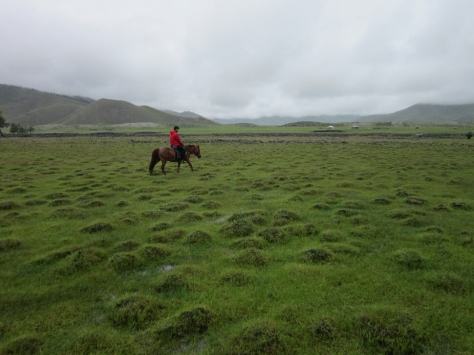 Later on in the afternoon as we neared our ger camp, our horses knew they were near home and were getting a bit of a move on! This was such fun and going through the countryside at such a pace was exhilarating! Stefan and his horse went a little close to another family ger, who had a guard dog that took a dislike to them coming so near, and it bolted towards them and started chasing Stefan’s horse, I was panicking that it was going to start chasing mine, Stefan’s horse was freaking out a little, my horse and Sebastien’s were getting faster as they were scared at the commotion. I was frantically trying to pull my horse to the left to get him away, and amongst the fiasco mine started to gallop at a flying speed so I did just as Gala had said, and kept my balance! Stefan also kept his cool and managed to get away from the crazy dog without much ado!

It was great fun, no helmets, no rules, just a great hack through the stunning countryside on these beautiful and pretty well trained horses. Exhilarating!

Who needs to spend £30 an hour in England on learning to trot, when you can come to Mongolia and go from 0-galloping in two days! Awesome fun.

We arrived back at our ger camp after the 15km ride, and had a little rest (after turning the ger into a laundry room of course!)