As we’d kind of got on alright on the first tour, and managed to tolerate each other for longer than a few days, myself along with Stefan and Sebastien decided to do another tour together!

(I joke, these guys are great and we’d had a lot of fun and I jumped at the chance when they asked if I wanted to do another trip with them!)

We wanted to cover Central Mongolia, and so off we went on an eight day tour.

The first day we went to Khustai National Park, to look for the Takhi horses, the truly wild horses in Mongolia, sometimes difficult to find.  They were indigenous to Mongolia,  and at the beginning of the 20th century some were taken into zoos and to other countries such as Russia.  They died out in the 1960’s, but from the captive few known to be held elsewhere, they then reintroduced 15 back into the wild between 1992 and 2004, and there are now about 300.

After driving through the park we didn’t manage to spot the takhi, so we camped up (same tents as before, but less wind and a team that was our driver and guide, who put them up for us with the pegs I’d previously talked about!)  After dinner we went for a walk into the hills and it was beautiful. 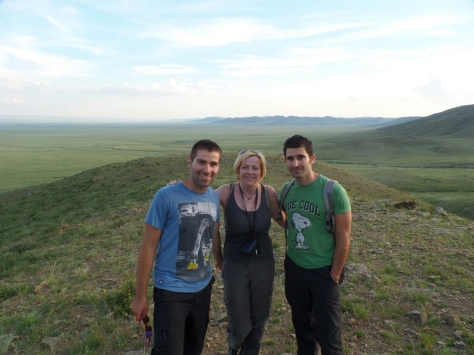 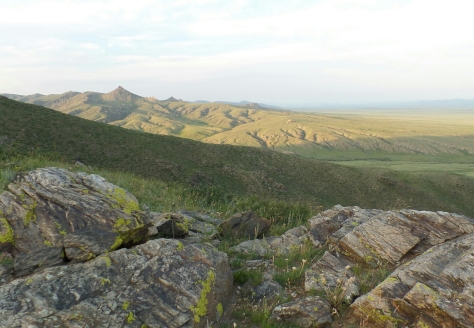 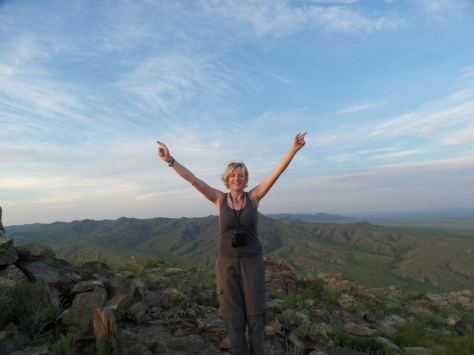 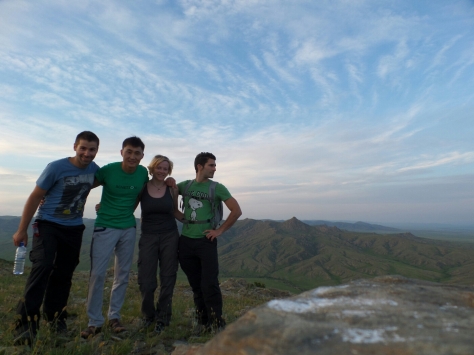 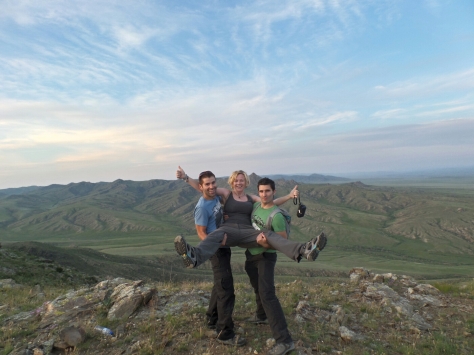 In the morning, the matriarch that was our personal trainer, Stefan, was determined that Sebastien and I would still work out despite the fact it was raining outside.  Now, bearing in mind the three of us had slept in a tent, apparently this was no problem and we could still do it.  Reluctantly we tried the plank, a few Russian twists (a killer ab exercise which I secretly love), and a few press ups were attempted too!  But after knocking elbows and other clashing bones, sliding around on the nylon sleeping bags, trying to BREATHE in the stuffy tent, Sebastien and I joined forces and refused to continue the day’s workout!  I like Stefan’s can do attitude when it comes to working out, but this was really not an ideal training ground for 3 people!

On the way out of the park we continued to drive slowly so as to try and spot these elusive horses, and after about half an hour, our guide spotted them!  We got out of the van and got up close to them, taking photos and videos of these beautiful creatures.  They really are very pretty horses. 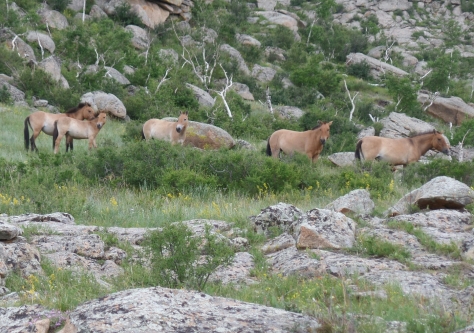 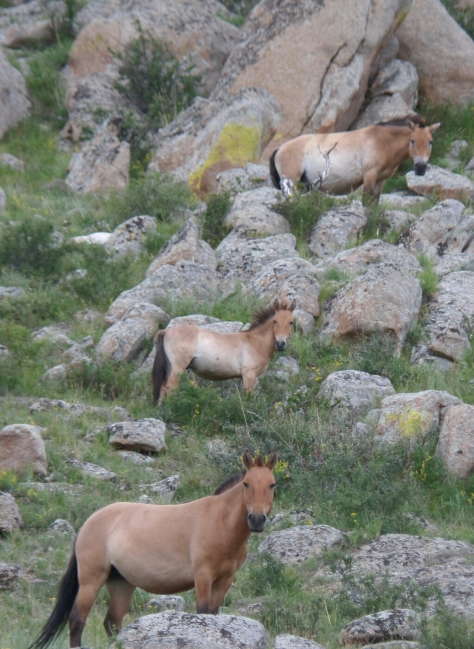 A nomad moving his animals to another location 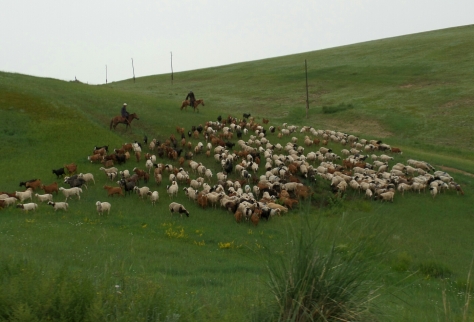 Our guide and driver, Gala and Banza

Later on that day I had that dreaded rumbling in the stomach feeling, and had to make a couple of stop offs at rather unpleasant toilet locations (the ones where I mentioned before, that people’s aims could be a little better, and I’m not just talking number ones here!) and you can imagine when feeling a little delicate oneself that this is the last place you want to go!

Anyway moving swiftly on from that one, after a long drive, and a lay down at our next location, we headed off for another camel ride.  This one a little more pleasant than the last!

Photo above and directly below, courtesy of The Nomadic Boys 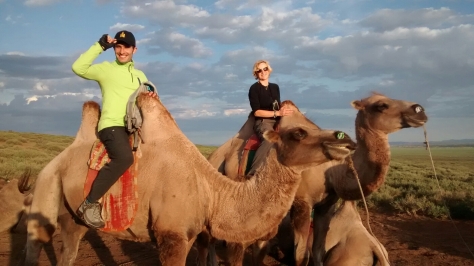 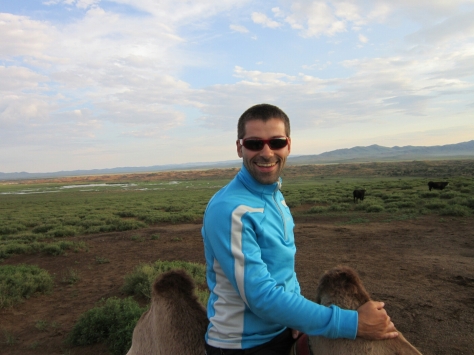 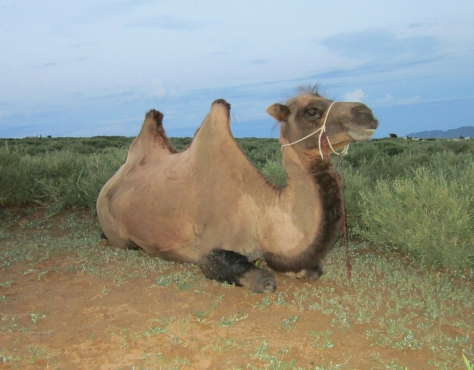 In the morning, we had even managed to get our guide and driver to join us for our workout!  This again was against a stunning backdrop of horses and mountains.  Not quite sure how Banza our driver did it in his flip flops though!

Our ger camp for the night 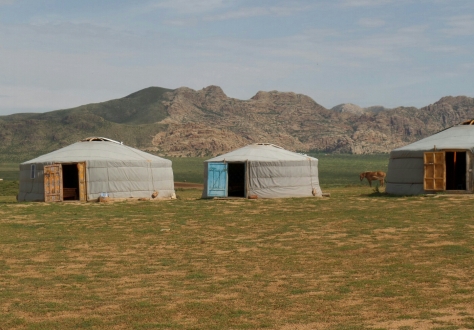 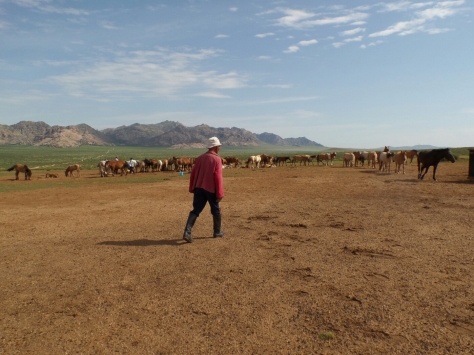 Not content with how far I was from the horse, under Stefan’s instructions I moved closer, and then a little closer still, until…, BOOM, bloody thing, little though it may be, kicked me!  As you can see, I’d made a hasty exit before Stefan managed to get the shot! 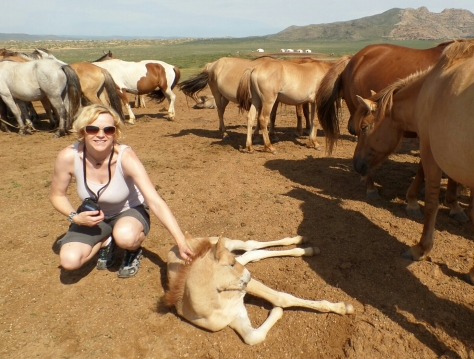 Then the horse got up…. 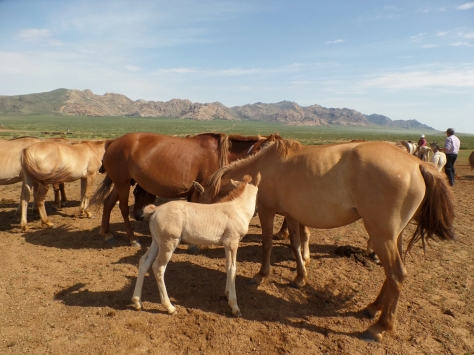 Another long drive ensued to Orkhon Valley, but it was a very pleasant drive with stunning scenery, rolling green hills and mountains with pine trees on them, the first time I’d seen lots of trees in Mongolia, you may see the odd one dotted around but not 100’s like this, it was very pretty.

We stopped for a quick pit stop and then quickly realised the pretty scenery did not come without a downside.  Flies.  So many that it felt like they were stuck to you.  On walking to a toilet, the swarms were so big I decided to go somewhere near the toilet, rather than go inside it, for I fear I may never have returned!