On arrival in Hoh Chi Minh City (aka Saigon), I got off the bus to be greeted, as usual, by eager taxi drivers/motorbike taxis, people transporters etc etc.  I had searched on my GPS for the street I was looking for, and it showed me it was about 3 miles away.  I asked a taxi driver how much it would be, and he said ‘it’s on the meter’.  Oh good, I thought, as this is usually the best rate!  I emphasise the word ‘usually’.

After hopping into the taxi we drove for about 500 yards, and I noticed the meter jumping up in cost pretty rapidly. I kept an eye on it, as well as keeping an eye on my GPS map on my phone, just to make sure the taxi driver wasn’t going in the wrong direction.  After heading in the other direction, but then turning back in roughly the right direction, I gave him the benefit of the doubt, knowing that sometimes there is a better route (maybe to beat the traffic for example).  Still watching the meter, I noticed it had jumped so high, we hadn’t even driven half a mile and we were on about £5 already, this should have been about 50p or so!  I told the taxi driver to stop, his meter was jumping up ridiculously fast and I wanted to get out, (as I thought we were still 2.5 miles away from my destination).  This was going to cost me about £20 at this rate!  He insisted we were nearby and pointed at the next street name saying ‘this is your street’.  Unconvinced, I let him continue, and lo and behold it was Pham Ngu Lao, the street I was looking for.  The unfortunate thing was, there were two streets of the same name in HCMC, and my GPS happened to pick the one that was furthest away!  So, on arriving at my correct street, I realised we had driven to what was one street across from the bus drop off point, in a big circle!  I was quite cross at the taxi driver duping me.  Had my GPS picked the right street I would have known it was walkable.  However when we got there the meter said the price was £6, this is extortionate for Vietnam standards, especially as the guy had driven in a big circle to the next street across, so I refused to pay it and only gave him half.  Thinking inside ‘oh god he’s not going to have that, there’s going to be a huge scene’, and I expect if he’d have got angry with me I’d have coughed up after a bit of arguing, BUT, he never quibbled!!!  That’s because at even £3 he was quids in!  Anyway I felt good I had not let him completely rip me off, just a little!  Ha ha 🙂

Now if that wasn’t enough for one day, the best (or worst, depending how you look at it) was about to come…..

My friend Laura was due to arrive in the evening, and I was looking to arrange a taxi to go and meet her at the airport.  After my earlier experience in the day, I decided to look on google about cabs in HCMC.  It informed me that taxis in HCMC are unregulated and the driver could set their meters at what they like basically – hence my earlier ride with the rigged meter!  Apparently the best companies to use are Vinasun and another name I forget now.  So, I find a guy sitting in his Vinasun cab, and ask him how much to the airport and back.  He said it’s metered, so I say I know all about the rigged meters and I want a price!  Anyhow eventually he said $8 USD (about £5) for the whole trip. I said ok.  I got in the cab, he was a friendly young guy, quite chatty, and I thought he seemed a nice guy.

He asks for a calculator (ie. my phone, this is standard practice to show prices with the language barrier) so he uses my phone to write 134,000.  I say, ‘I know how much it is, but you have just swapped my note over’.  He keeps saying that I haven’t given him enough, waving the notes about in front of him.  He then gets a newspaper out and says give me a pen, I did not need him to write how much it was, I KNEW how much it was, my dispute was that he had stolen money from me.  So he writes on the newspaper the cost.  I say ‘I know how much it is but you’ve stolen money from me’.  I wasn’t getting anywhere and did what he was hoping I guess, and gave in and gave him another 100,000 note (about £3).  So I’m getting my bag together, and I look for my phone…..I say ‘where’s my phone?’, as I search through my bag, realising it is not in there, ‘what have I done with my phone?’, getting really agitated with this whole situation, I once again ask, now in an angry voice, ‘where’s my phone?’ directing the question at him.  With this, he lifts the newspaper away from his lap, and retrieves my phone from between his legs, hidden by the newspaper!  I grabbed it from him, stormed out of the cab and left the door swinging open.  It took about 3 seconds as I walked away from the cab for it to sink in everything that had just happened, and I was SO ANGRY, I think the delayed realisation that he was just about to steal my phone was a good thing, because I really, really, wanted to go back and punch him!  Not the best idea but god did I feel like it!  He basically used the swapping of the notes to cause confusion, used my phone as a calculator to show the price (that I already knew anyway) hence this now gives him my phone, then to add more confusion he got the newspaper to write on and also used it to HIDE my phone between his legs, hoping that I would forget all about my phone, and I don’t know how I didn’t forget it, because it would have been so easy to do, but something just made me look for it!  I always look for the positive, and despite him trying to steal my phone, he only got £3 from me, which I can live with.  I have  now made a conscious decision that my phone does not leave my hands!

After this I refused to go anywhere in a taxi again in HCMC!  Not a good day 😦

Now, onto other areas of HCMC!

We visited the war museum which was obviously a very biased account of events, but neverthless a huge waste of life on both sides, and a harrowing afternoon.  The most upsetting part of the museum was an exhibition of photos and stories of the victims of Agent Orange, a chemical called dioxin that the U.S Army used to defoliate Vietnam so that the Vietcong had nowhere to hide.  The chemicals unfortunately have had terrible effects on not only the people that were living at the time, but birth defects are continuuing to this day to second and third generation victims.  I was looking at a display on photos of babies that had been born with horrendous defects, some without eyes, some that died within a day of being born, and some that the parents had left at the hospital soon after giving birth to them, presumably unable to cope with the disability or life that their child faced, and the potential difficulties involved.   The silence was deafening in the museum, harrowing is the only word I can use to describe it.  A young guy started sobbing next to me, and had to leave the room.After this I could hardly hold my tears back as I wandered the rest of the museum in a deeply saddened haze.

A few photos from outside the museum

The next day we visited the Cuchi Tunnels.   This is a network of over 250km of tunnels, dug out by the Vietcong after the U.S Army/North of Vietnam had used Agent Orange throughout the country.  The Vietcong could no longer hide above ground, so they had to go under.  Families lived underground, babies were born there, hospitals were set up here too.

One of the entrances to the tunnels 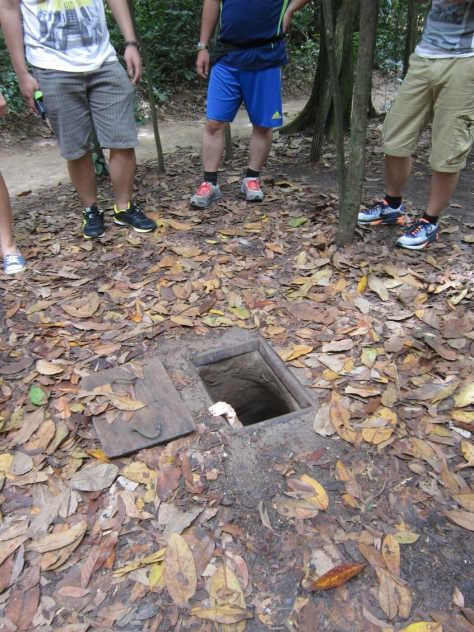 There is a 30m section of the tunnel that is open to visitors, to test out your nerve in the claustrophobic conditions, which, by the way, have been widened for Westerners!

I didn’t think I would be able to do it, but I surprised myself, I made the full 30m of tunnels, and got a few pics along the way.  At one point you are actually crawling on hands and knees to shimmy yourself through the tunnel!  I was a little scared to say the least, and came out covered in bruises as I was trying to get through so fast! 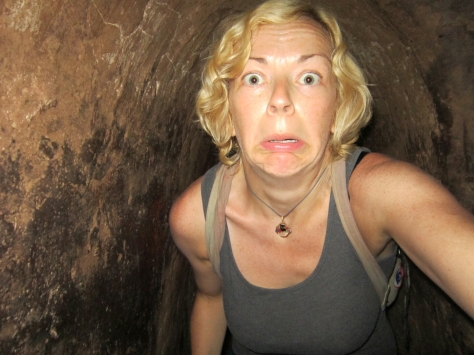 On hands and knees

Some of the traps used in the war 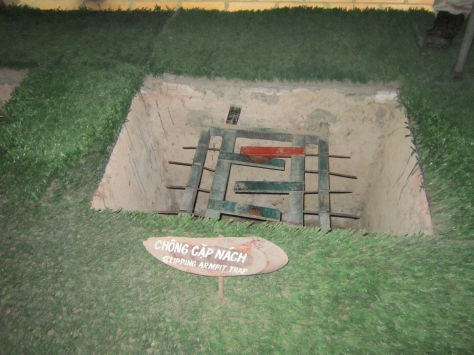 I thought Hanoi was bad for scooters, I hadn’t seen anything yet!

A few clips of the moped madness in this city!

Laura testing out the local method of carrying coconuts!

Bats in the War Remnants Museum 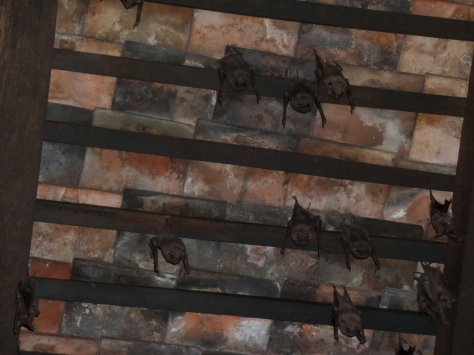 On our trip we visited a craft manufacturers that gives disabled people the opportunity to work and earn money.  These intricate designs are made from eggshell and are beautiful! 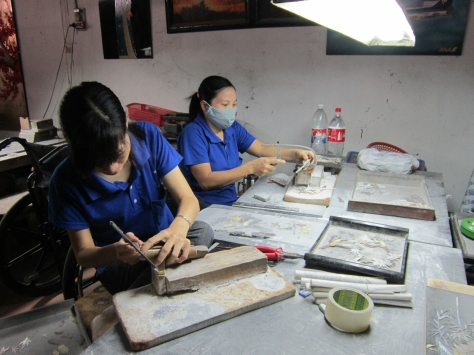 Hoh Chi Minh City was another big city, and I did like it despite the taxi episodes.  Although saying this I am always ready to leave a city to get out into the countryside!