After my trip to Halong Bay, I had one hour to change my stuff over from the luggage storage and then to set off on my overnight bus for Sapa.  Not sure if me and sleeper buses are going to get on…they are extremely uncomfortable, slightly claustrophobic, and only allowed for about 3 hours sleep!  I have been poshing it upon trains for too long obviously! 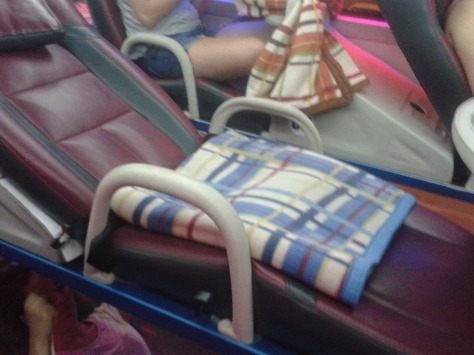 On arrival in Sapa, it was absolutely pouring down, so I quickly headed out to buy a hat and waterproof trousers.  The weather calmed down and the trek turned out to be amazing, although quite slippery at times.  For the group of 13 people, along with two other groups, we seemed to have an entire army of local ladies to help us, some young, some old, but all taking our hand to steady us on some of the precarious bits.  Slightly embarrassing as all of us in our trekking shoes, and them in either wellies or flip flops!  They were all from one of the ethnic minority groups called the Mhong tribe, and they were all so tiny!

Sapa’s race terraces are truly beautiful, and I took endless photos of the vast lush greenery that surrounded us. 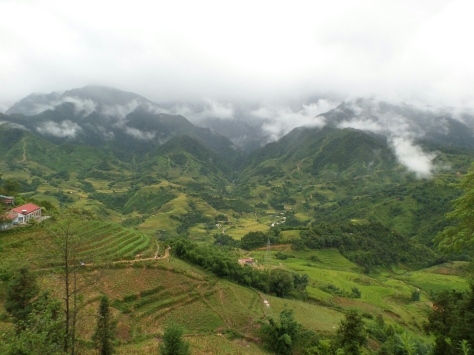 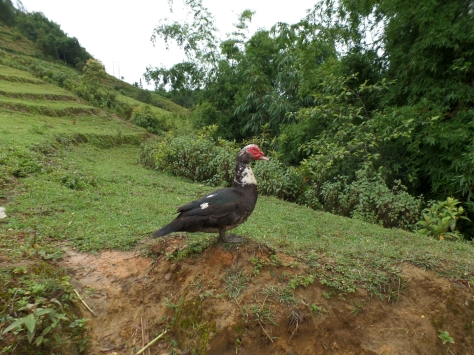 One of the little girls selling friendship bracelets

A Spanish guy getting mobbed by the young sellers! 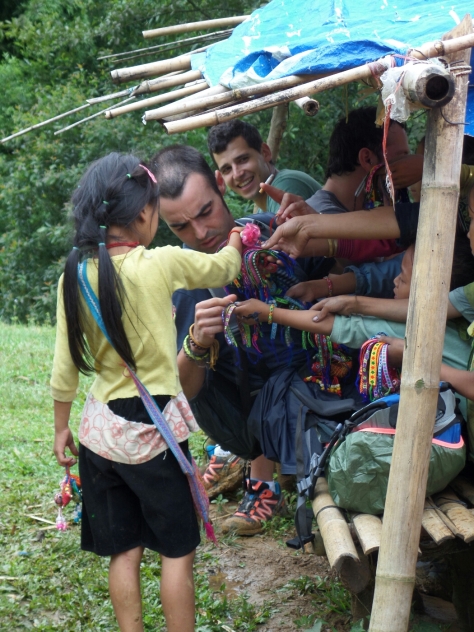 A panorama of the area 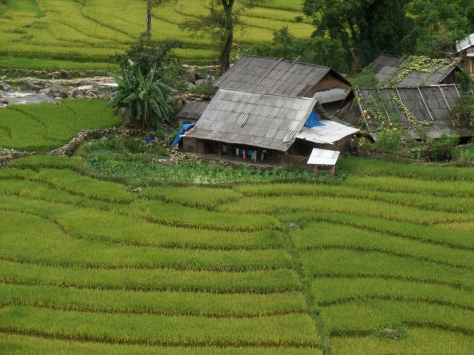 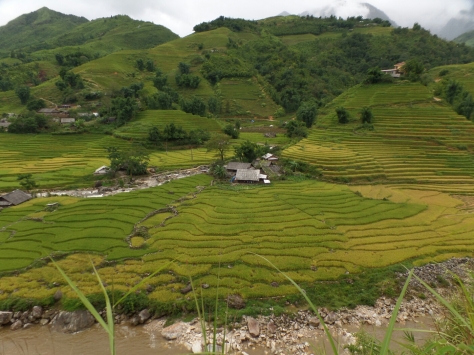 Ok, if I embarrass myself then so be it, but I actually never knew, that rice just grew…..on a plant!  Under the husk sits each little grain!

Sang on the weaver

Best move out of the way of this one!

Poor piggies, not quite sure why they had to keep them like this… 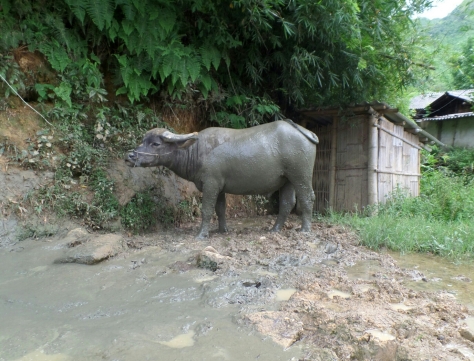 Sleeping on the job 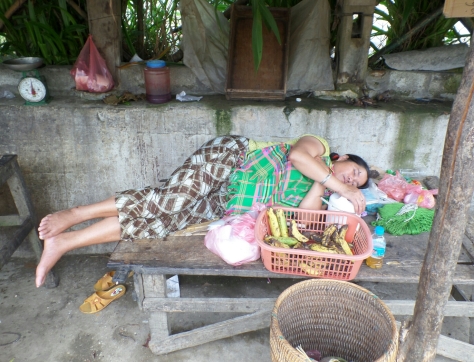 My bed for the night 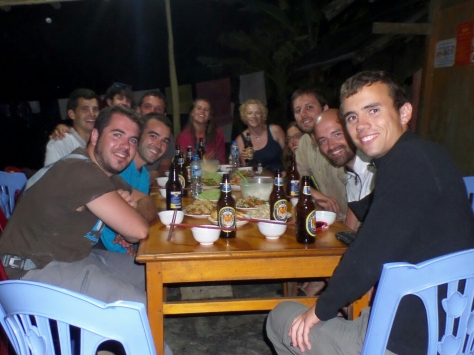 Our guide, Sang, was brilliant, so funny, and got us all on the Happy Water in the evening (home made rice wine, not dissimilar to tequila, and just as vile!)

Our guide Sang dishing out the shots!

The next day we trekked before lunch, and then 12 of our group of 13 headed back to Sapa, and I was the only one doing the 3 day trek, which meant I had a day and a half of just me and the guide, what a result! 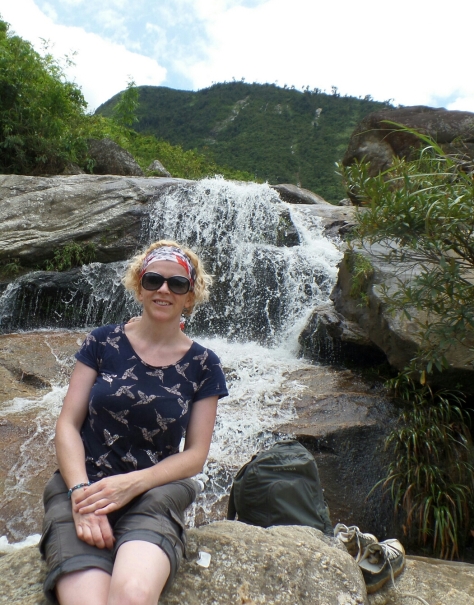 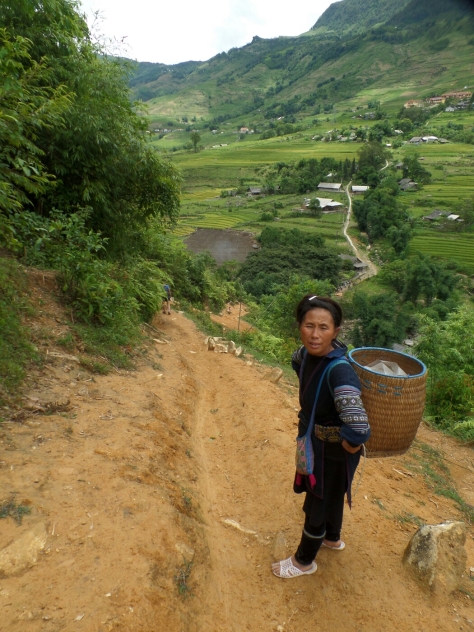 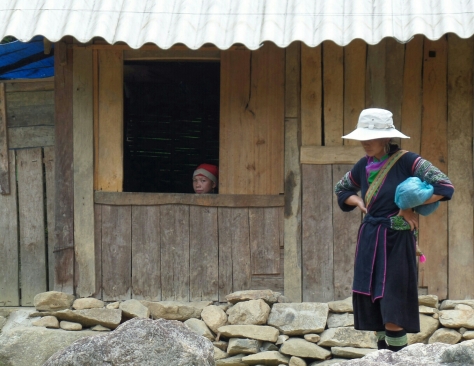 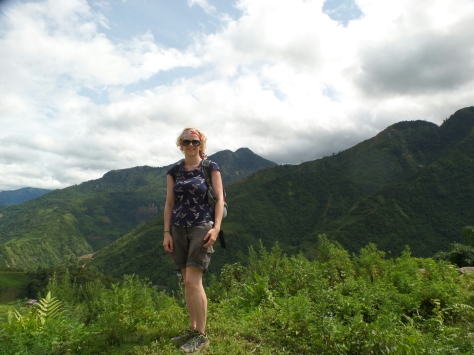 A very sad thing to see 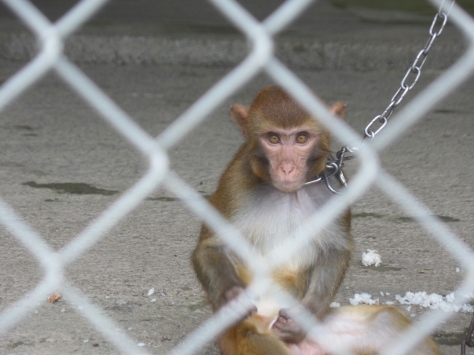 Here they don’t just have puppies on leads…..a small boy with a huge flying bug, on a string! (It will be taken home to eat apparently)

I got to ask her all sorts of questions and one that and been intriguing me the most, bizarrely, was their consumption of dog meat!  Every house has at least two dogs and I wondered if these were for food…apparently not.  Most people have them as guard dogs, but they are not pets and will not have names, and when they die they will end up on the family’s dinner plate.  People do eat dog here, but it is better to eat it young apparently, at around seven months old, or the meat will be too strong.  They usually buy the meat from the market.  I asked if they ever gave dog meat to the tourists, but she said they didn’t!

We also spoke about rabies, and she said her and the other villagers were paranoid in being bitten, as there are dogs there that have rabies.  Apparently if someone is bitten, they keep an eye on the dog for 15-20 days, and if after this time the dog is still alright, then it did not have rabies and you would be OK. Pretty scary stuff!

After a night in a different home stay, we walked through the village the next morning and up to the local school. 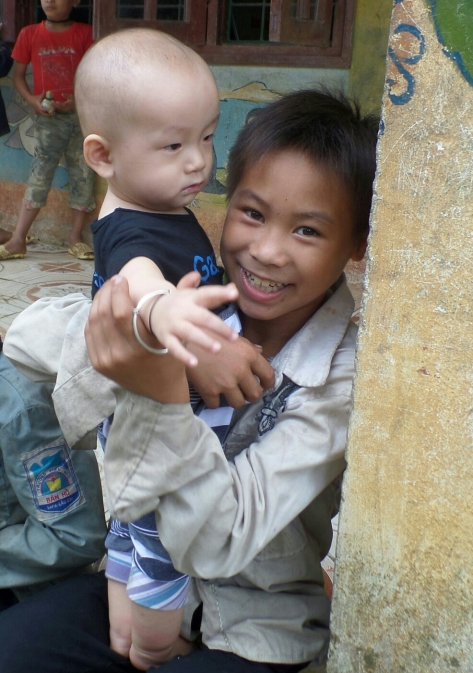 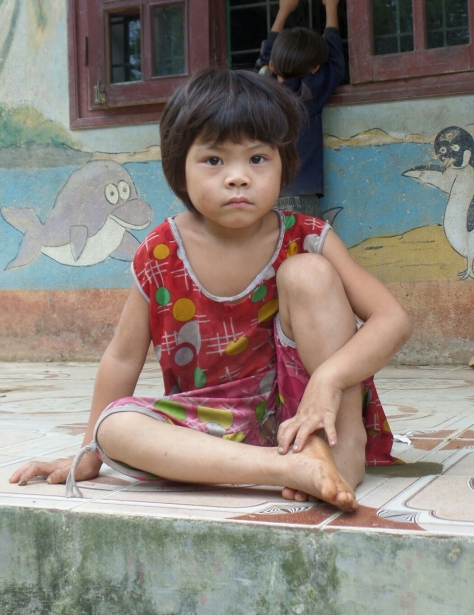 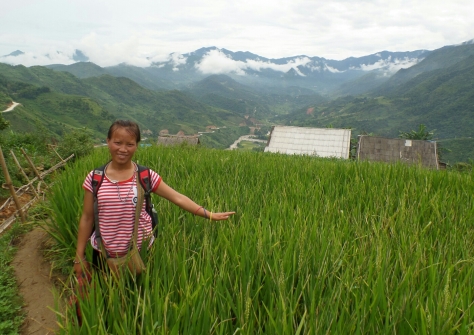 A novel mode of transport! 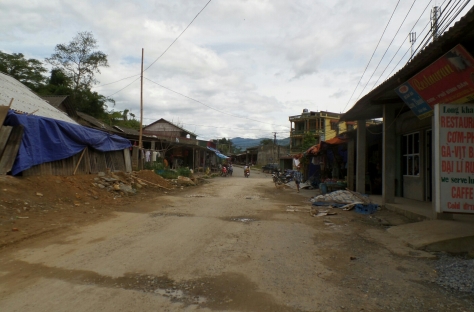 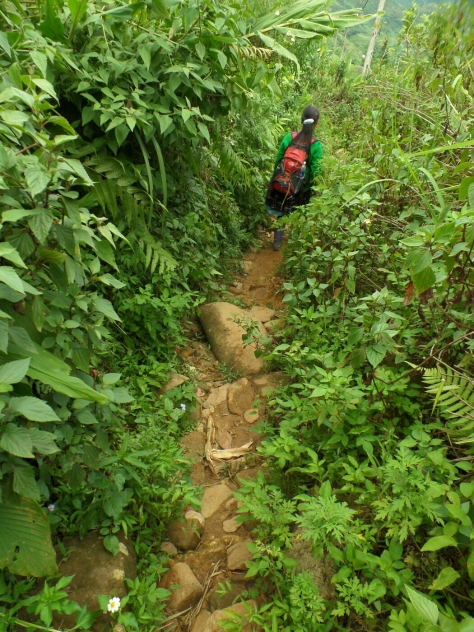 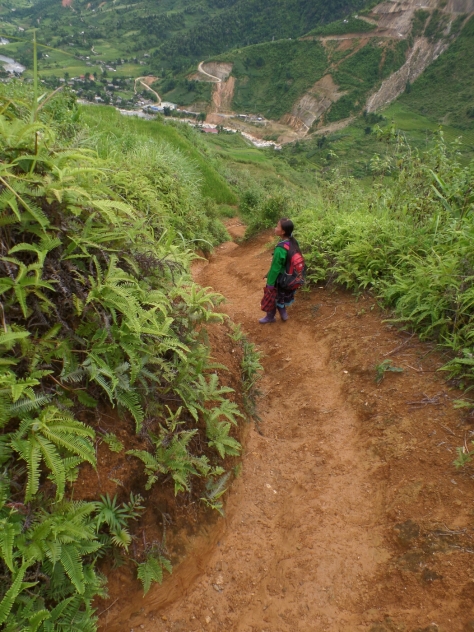 Of all the rice terraces in Sapa, apparently all of the rice produced is for the grower’s own consumption, and is not grown to sell.  They will of course sell a little if they produce an excessive amount, but predominantly these families are self sufficient, with their rice production and handful of animals, namely buffalo, pigs, chickens and ducks.

At the second homestay, where a Spanish couple were also staying (out came the Happy Water again!)

After lunch we headed up the mountain for the final climb to reach my lift back to Sapa.  With the humidity I was dripping like a shower, but it was a great climb.

The village where we stayed 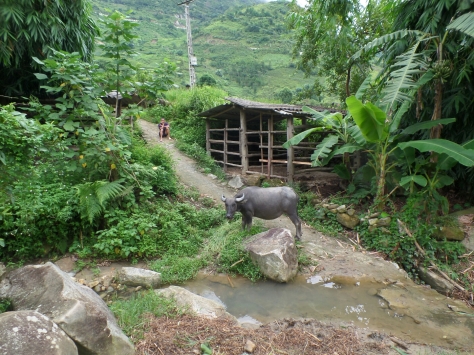 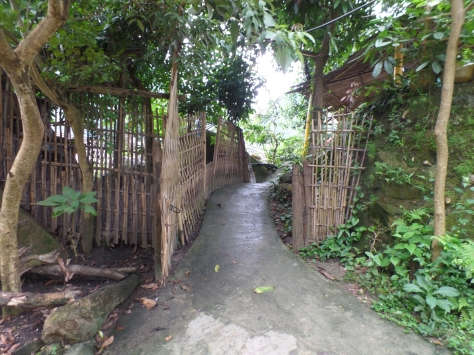 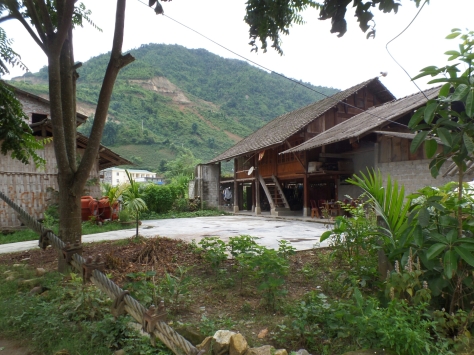 This for me is one of the saddest things I see here, most houses have wild birds in tiny little cages. 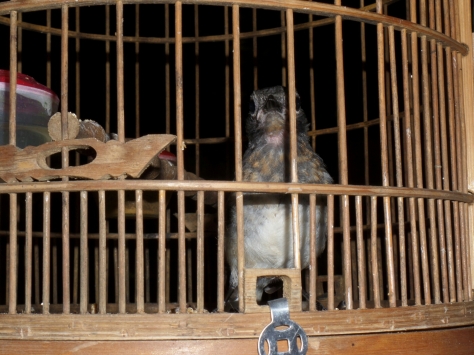 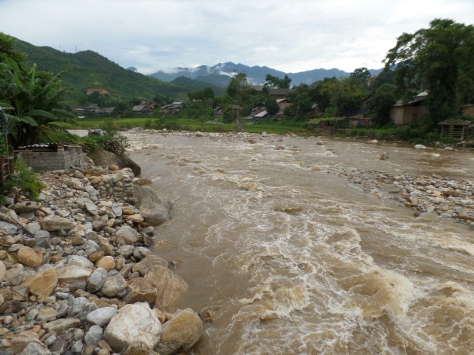 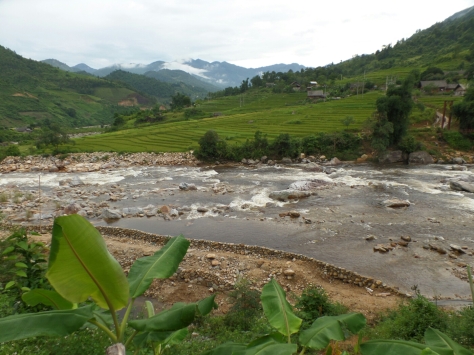 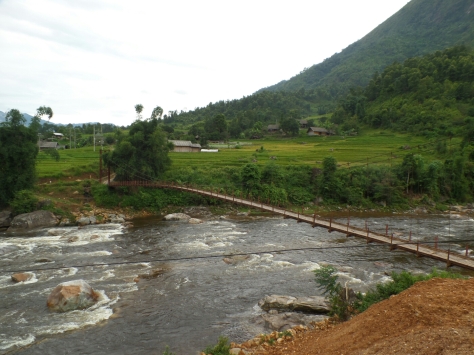 A bridge that has seen better days… 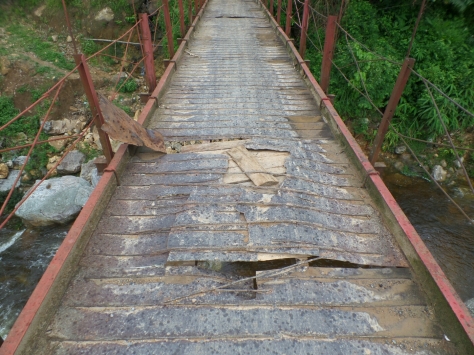 Due to the fact I was the only one in the group, my lift back to Sapa, instead of being a minibus, was a ride on the back of a scooter, along with my guide, ridden by a very young lad!  It was an awesome way to get back, through the winding mountain passes and more dramatic scenery.

The overnight bus back was a little, but only marginally better.  I think a big fat pillow is required for these trips, I will have to invest in something! Although this was the least of my worries on this return trip…..see next post! (to follow soon)

6 thoughts on “Trekking through the rice terraces of Sapa”